Jon Meacham has written biographies of American presidents. He has also written two books dealing with the intersection of Faith and the American political tradition. 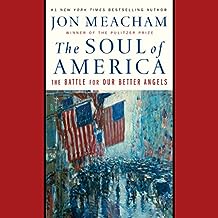 Meacham is not a Christian nationalist; he is not about imposing Christianity or excluding other traditions. But he does see our political tradition as having roots and values of the Judaeo-Christian tradition at our core.

The “American soul” has been able to embrace (at least to some degree) many different traditions. The KKK has thrived at one point in American history; there were many Congressional representatives, Senators, judges, and governors; the KKK proudly marched publicly in many cities and towns, including Washington, D.C. The American soul has also embrace the civil rights movement and the vision of Dr. Martin Luther King, Jr.

He points out that people often ask, “Has it ever been this bad in the United States before?” They look at the divisiveness, crude language, ridiculing one’s opponents, Congress’ inability to get anything done, etc. Meacham says, “Yes, it has been worse….We had a Civil War; we have had rioting in the streets, and so forth. And yet got through it.” But he wants to be very clear. We must not be complacent. It’s not that things will just get better. We have to look at our problems, seek out solutions, talk with one another, and then sacrifice to make things better.

I am reminded of Scott Peck’s book on community , A Different Drummer. Very often groups will see it’s necessary to change, but they expect that it will be other people who change and adapt; they expect to remain exactly the same. It’s only when they realize that the entire community or organization may collapse that they themselves change.

We can make things better, but we will have to work and sacrifice to do it. It won’t just happen by itself.