But they were right about the idea that the themes of 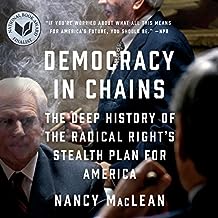 history are really more important than specific people or times, places, and dates.

One of the themes that runs through American history and is still current is the issue of social welfare. What services should the government provide for the “general welfare.”

Democracy in Chains is an explanation of a plan to build support to remove such government programs. There are two elements to their position: 1. The government should not have a role in the free market; their theory is that the free market self-corrects and provides the greatest good for the greatest number. 2. Some people have to pay more taxes to support such programs. For example, there are people who have no children in public school, but they must pay school property taxes.

This book is how people are interested in, not only who rules (who wins elections), but also in changing the rules (changing how we approach such services). They plan to limit the number of voters, the role of collective groups (unions, voluntary associations like A.A.R.P.), limit the power of local control, reduce consumer rights (by “agreeing to terms of service” you give up the right to sue and to agree to arbitration).

The goal is to replace\eliminate Social Security and Medicare with privatized plans.

An interesting and relevant topic. It helps give a frame through which to see current politics.

2 thoughts on “Democracy in Chains”