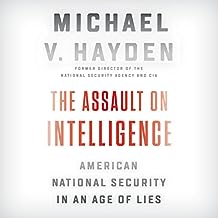 Michael Hayden is a former director of the C.I.A. He is currently retired.

His primary thesis is that we no longer rely primary on facts and data, but rather on feelings and what we think or hope to be the case.  We tend to live in silos.  We only talk about issues important to us with people who already agree with us and confirm our beliefs.  We thus avoid answering or asking hard questions like “What are the hard facts or data that make something so?”

The central person he focuses on is President Trump. But he is very clear that President Trump is not the cause of this phenomenon; he is the result of it. He provides examples of how it works, but it really is much deeper in our society and social discourse that the president. While he critiques the president, he seems to try to be fair and respectful.

An example would be the issue of the FBI “embedding” some one in his campaign. When pressed for facts, Mr. Trump responds with, “A lot of people agree with me,” or “Just look at the basics.” He doesn’t have a name or a circumstance of how this happened.

By now means is Mr. Hayden “playing politics.” He is a career military and intelligence officers. He has given his life in the service of providing the most accurate information possible for the political and military leaders of the U.S. His concern is that when leadership (and not just Mr. Trump) do not listen to facts and data, we can have a serious problem.

Democracy requires open discussion of the facts. We need freedom of speech, not just to let people share their opinions, but also to debate information so that we can arrive at the best solutions based on the most accurate facts.

Our political debates have degenerated into opinions and feelings without reference to facts. Francisco Cantú in The Line Becomes a River points out, for instance, that in all the talk about building a wall, we forget that we have already built on. In the early 2000’s, Congress authorized and President Bush built approximately 700 miles of wall along the U.S.–Mexican border (the other miles are mountain and desert). No one, pro-wall or anti-wall, makes reference to it.

Our communities and nation need clear facts and open debate. The common good is not served by half-truths or only feelings. Facts matter.